Here’s a picture with the bike in it. Normal service has resumed!

No George, it’s Bungle Bungle! Pernululu national park is also known as the Bungle Bungles, which I think is quite fitting for a place where the rocks have rainbow stripes in them!

Continuing the theme of photos without my bike in then, here’s one of the beehive rocks up close. It was overcast when I was there, but when the sun broke through they were quite stunning.

With a long ride on gravel back to the sealed road ahead of me, I had a quick pee before I left. And in case you’re wondering, yes, I was careful with my zippy!!

I wrote up to a strange slapping sound in the national park. I peeped over the edge of my hammock to see a beautiful blue winged kookaburra slapping a fish he’d just caught. I suppose he wanted to make sure it was dead before swallowing it.

I watched as he came back to the same branch 11 times, each time with a new fish. I was thinking what a great fisher he must be. Unfortunately my camera was on the bike, and in getting up to fetch it I scared him off.

As I was packing up I dropped a wrapper into the creek bed. Retrieving it I saw a group of fish in a drying out puddle. Some were already dead, the others squirming around in a desperate fight fire survival. I guess Mr kookaburra wasn’t such a great fisher after all!

Not pleasant to watch, I felt a bit helpless as I could do nothing to save them. Time to ride away and not dwell morbid thoughts!! 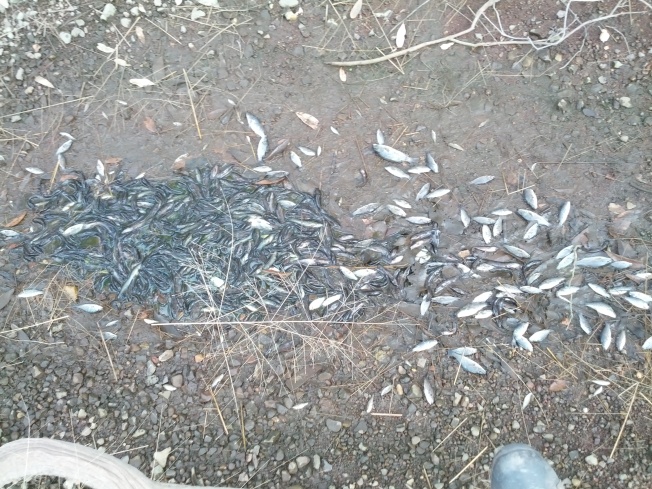 Message:Random place of interest along my route….

If the above link does not work, try this link:

So I called into the Pernululu national park. It was recommended by a French lady in Katherine, called Christine. (Or maybe it was the other way around?). Anyway, not to be missed apparently, and since I was passing right by…..

To get there you have 75 kms of 4WD only terrain, with several creek and river crossings. Up to now I’ve stayed on the sealed roads, mostly because that’s been the way I was going – but also because I don’t feel the need to do the dirt! I’m sure there will be plenty of dodgy roads between here and home, so why go out of your way to find them now?

I asked a big 4×4 coming out what the track was like and they said “rough”. Ok then! By this time I’d already decided to go in, if it got too squirmy I’d just turn around. Three were some soft sandy stretches I didn’t like, but after 10k or so I started to find my off road mojo. Until I got to the first river crossing!

Soft sandy banks at each side, unknown depth and no one around to hoik me out if I got stuck. But I figured enough people were passing each day to make it a safe bet, so I just went for it! I was so pleased to make it without incident I stopped to take a photo, and here it is!!

This is Yusuke, from Japan. Yusuke is traveling around and working. Nice chap. He was staying at the same camp site in Kununurra and very taken with my bike. 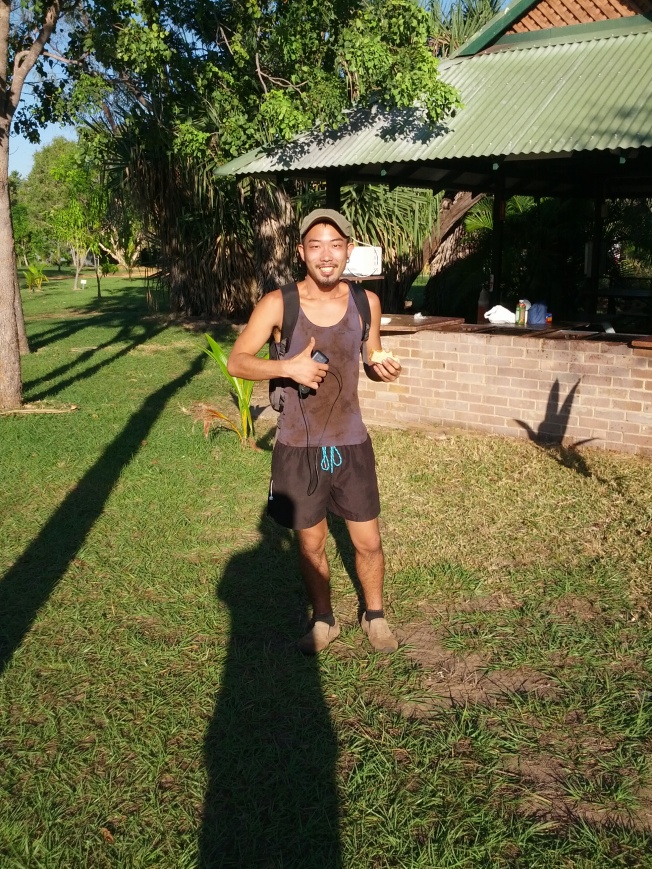 These trees are cool, I want one on my garden. I don’t know much about them, or why they have such a large trunk, but it looks cool which is fine by me.

Like termite mounds, the problem with Boab trees is that once you’ve stopped to take a picture there’s a bigger and better one just around the corner!

Sadly, most of them have been defaced by half whits who are intent on carving their names. Or spray painting them, for example “The lads on tour 95”. How about a come back tour with a bucket and sponge you retards??

On the way back through the Kakadu national park there were a few controlled burns going on. Something that surprised me was the amount of heat given of. This was just the stubble, or short grass that was being burned – but the heat was fairly intense.

Looking back on the bush fires in Victoria, where whole eucalyptus forests were on fire, you have to hand it to the fire fighters. The heat would be off the scale. There’s no way you could drive to safety through it either. It puts things into perspective, well for me anyway.

The highway back to Katherine was 300 kms of road I’d ridden up the day before. I don’t like doubling back (unless the roads are great or the scenery stunning), so I went through the national park. It’s a bit of a dog leg but it was worth it.

There are great swathes of wetlands that could be anywhere in the UK. Completely incongruous with the bush and totally unexpected. The local university had big signs advertising the fact that climate change will flood the area, which will be gone in10 years.

I probably should have taken a picture then! Scenery is hard to capture though, and sometimes you just have to be there. Here’s a picture of the park signs, which some hooligan has parked a motorcycle in front of!

I finally got to Darwin and the seaside. It’s a far cry from Llandudno! (That’s where we went for family holidays most years). We used to play a game in the car on the way there, who would be the first to see the sea. It’s pretty daft when you think about it, as the sea is always in the same place!

Anyway, as small towns go Darwin was, er, small! A lot smaller then I expected. I suppose the fact it was a Sunday made it seem smaller, with all the shops being shut.

The bars were all full though and sounding quite lively. Lots of European back packers out on the beer. I’ve seen that before and it’s not pretty! I wasn’t in the mood for a lively night, so I headed out towards the national park and a roadhouse in Corroboree. The landlady took great pride in telling me the place was going to be on TV. ‘Australia’s most bogan pubs”.

Sometimes you just can’t get away from it!