While I’m waiting to hear about availability for the Hercules bits I need, I’ve turned my attention to the Scimitar. The heads need to come off as the posts holding the rockers are being pulled out. They’re only an interference fit and unfortunately have started to move. I’ll get threaded inserts. I don’t mind the work, but I’m not really a car fan – I’d far rather be working on a bike.

Bob dropped some more light reading off the other day. I’m particularly interested in the balance factors different manufacturers used on their flywheels. Anything from 30 to 70%! The chapter on Balance and Torque reactions in P.E.Irving‘s Motorcycle Engineering book is fascinating! Though having said that, I’m no nearer to deciding what balance factors to apply.

I really like designing stuff, it’s so easy to make changes when you haven’t built anything yet!!

The photo shows the rockers on the Scimitar. I’ve fitted roller tipped rockers, which you don’t see that often. Nice aren’t they?? 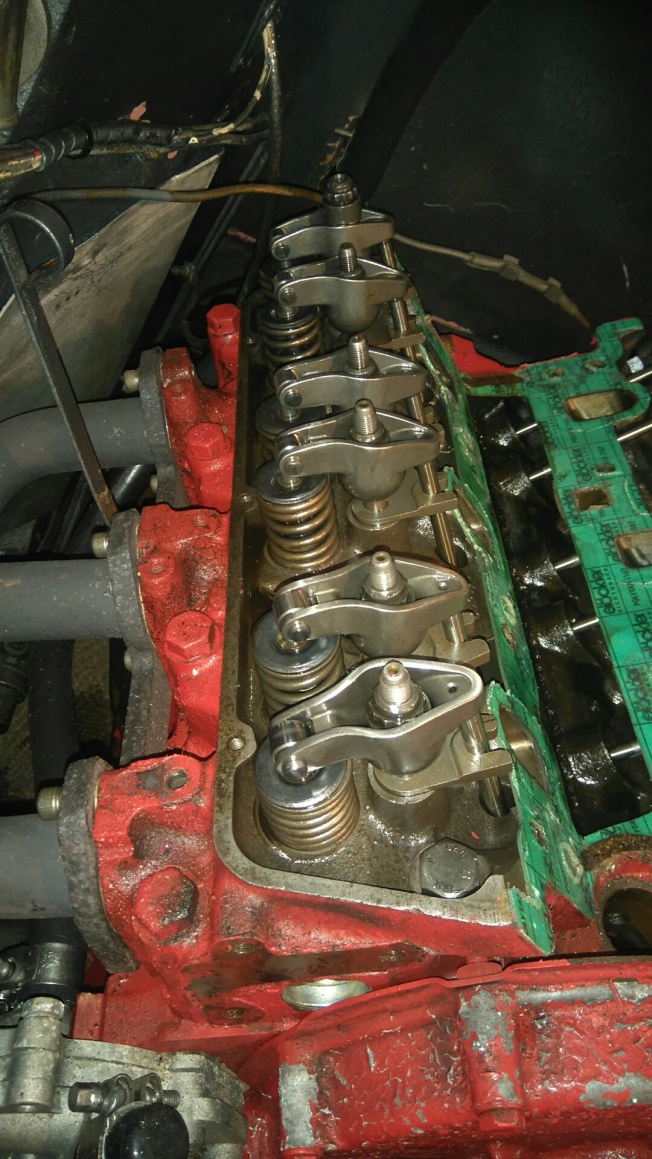 Bob called round the other day for a talk about engines, to see if I’d digested all the info he left over Christmas. I had as it happens, but understanding how things work isn’t my issue. I was working up to asking for some help with the drawing board. I haven’t used one since TD in school, some 30 years ago!! I’d have less of a challenge doing a design in CAD, but the software can be expensive.

We ended up around Bob’s drawing board to look into a few design issues. Bob’s sleeve valve drawings were up and we talked about which aspects we could incorporate, and those we’d need to change. We also had the Bristol drawings to hand which was very useful. It was a great way to spend the afternoon, he’s a good guy to bounce ideas off and we worked well together.

Items for consideration were briefly :

Driving the sleeve will probably be by chain, as the sleeve drive runs in the same direction as the crankshaft on the Hercules. Using a geared drive as per Bob’s engine would reverse the direction, which won’t do.

The gas flow through the Hercules is from rear to front, along the axis of the crankshaft. When fitted to a bike the gas flow will be from side to side, as the crank will have been turned through 90 degrees. This is unfortunate as it would look nice being more conventional, but designing in a bevel to swing the sleeve drive through 90 degrees would make it very complex.

It all looks doable, as long as I can source the parts! Just before I left, Bob asks me "Would you mind if I start drawing it up full size?". Would I?! Of course! I’m honored to have him fully on board for the project!!

A couple of friends came round today to help me put a new bench together. It was a great day as time in the garage is limited, but so much more productive with a little help. It wasn’t ideal as we ran out of gas for the Mig, so used my stick welder for the base. I think it still looks pretty good though.

Rather than rush it, we decided to leave welding the top until we’ve got gas. The plan is to take it all to a friends workshop where it’s all there ready to go. The finished product will be that little bit better, and as the basis for everything else – why not??

It’s something I’ll only do once (hopefully!), so let’s do it right.

And in other news, what a weekend it’s been for hearing from old friends! I’ve had a few emails from people around the world, some I really didn’t expect to hear from. Maybe the new year is a catalyst for reaching out? Either way, it’s great to hear people’s news. I will be replying in due course!

Happy New Year! I’m not sure who that goes out to, but anyone reading this is welcome to it.

I spent some time last night checking the valve clearances on the KLR. She’s done 68,000 km so long overdue for a check. Finding the time when it’s daily transport isn’t easy, especially for jobs that can "wait another day".

I’m glad I did! Looks like I just caught it in time. Exhaust valves are really tight and out of tolerance, so I’ll need to replace the shims. That’s a cams out job, with re-timing afterwards. It’s pretty straightforward really.

Considering the hard slog the bike’s been through, its holding up really well. A testament to Robust design and good manufacture, though I expect routine maintenance is also a factor.

An unexpected bonus is that simply being inside an engine is helping me make design decisions for mine. Duplex chains running in an oil bath last very well, and a self adjusting chain tensioner makes maintenance easy. I’m almost certainly going for a gear driven sleeve drive, but it’s always good to be reminded of other options.

But back to the job in hand, time to pop those cams out and order some shims!!