In the evening we planned to go camping. Phil had been told of a good spot and we were game. It took us over an impressive 2 km long bridge across the river Амур. Not the longest but the widest river in Russia, quite a sight.

We were late getting there so all the good spots were taken. We did some serious off roading before we gave it up and went back to Phil’s place. It was awesome! Phil got cracking in the kitchen cooking up some Plov, while we unloaded and spoke with his daughters.

дарья and Александра (Dasha and Sasha) both speak very good English, they’re learning at school. Dasha was especially helpful and we looked at a huge world map together, talking about the places we’d all been. Dinner was served for 10 people!

We were joined for dinner by Phil’s wife галина, лена, family friends василий and ольга. Olga is an English teacher and we had a very good conversation ranging many topics. (In English, in case you’re wondering!).

Dinner was great, Plov is tasty but there were plenty of other things to try, like a fern that’s only eaten in eastern Russia. Dasha and her friend Евгения told me the name of their favourite snack, even wrote it down for me. (But I lost the paper. Oops!).

After dinner Phil cracked the guitar out and belted out some Russian folk songs. He’s very good! Olga translated the lyrics. I knew I should have bought my banjo! Before I knew it, time for bed. Where does the time go?

In the picture, our gracious hosts Phil, Galina, Sasha, Dasha and Lena. In case you’re wondering why Phil doesn’t have a Russian name, it’s a nickname. (Technically it’s ‘Feel’). No-one I know calls him Nikolai.

I couldn’t thank them enough when I left, so if you’re reading this guys – thanks again! 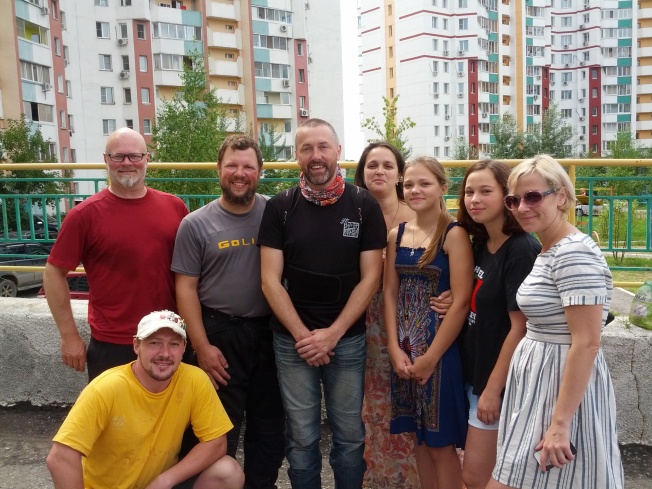