Saturday night at the HUBB. After the presentations and dinner, the usual Irish hospitality and entertainment kicked in and a great time was had by all. I managed to catch Dylan for a few words, to see what he thought of my bike ferry idea, to congratulate him and generally have a laugh.

He’d missed my presentation as I was first up on Friday afternoon. We got chatting about his last HUBB meeting in Virginia, and I wondered if Chip or Ken (my travelling buddies through Russia and Mongolia) were there. I know Ken’s farm is in Virginia. I was describing my journey when Dylan’s face lit up and he said “Ah, you’re the other guy!”.

It turns out that Chip and Ken were both there and presented about their journey around the world. I’d love to have seen it. Apparently they were pretty funny, I’m sure they were! From the sound of it I at least got a mention, so I guess I’m world famous now?

It’s a small world in so many ways, yet in others it’s so big! Before it got too late I asked Dylan to sign my tank. The ink will fade eventually like many quotes and signatures before it, but with a little luck the memories will live on for a good while longer. 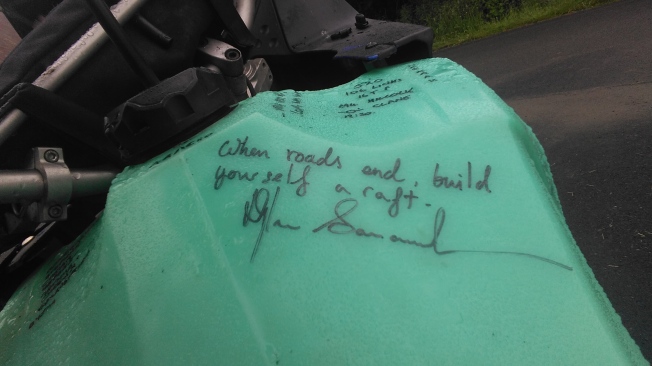